Trending
You are at:Home»Environment»New App Puts Air Quality Data in the Palm of Your Hand
Tweet
Share
Email

We couldn’t cross the parking lot quickly enough. My husband’s eyes had been watering all morning and at each stop on our trek through the Umpqua Valley that Saturday a little more smoke permeated our bubble.

To my right a family headed to a picnic table. Grandpa lagged behind two flushed children and a woman. “Oh no, is she pregnant?” I asked my husband. “It’s OK,” he said. “They probably won’t be outside long.” I had doubts, but an air-conditioned lobby awaited and ahead the coast where we hoped clearer skies awaited.

For Oregonians headed to the coast, that Labor Day weekend would bring little relief. Things were about to get a lot worse. Portland, which had been hard hit a month earlier by smoke from Canadian wildfires, was again about to be shrouded in smoke. That night, Sept. 2, 2017, the Eagle Creek Fire started in the Columbia Gorge. It would eventually consume more than 48,000 acres.

From the coast to the Cascades, smoke from wildfires spared few parts of Oregon in August and September 2017. Last year, about 500,000 viewed the Air Quality Index on the Oregon Department of Environmental Quality’s website.

On one day alone, the index had 70,000 views. For the seemingly few of you who didn’t leave the index up on your work computers last year, the color-coded tool provides air quality data from over 37 monitors around the state. 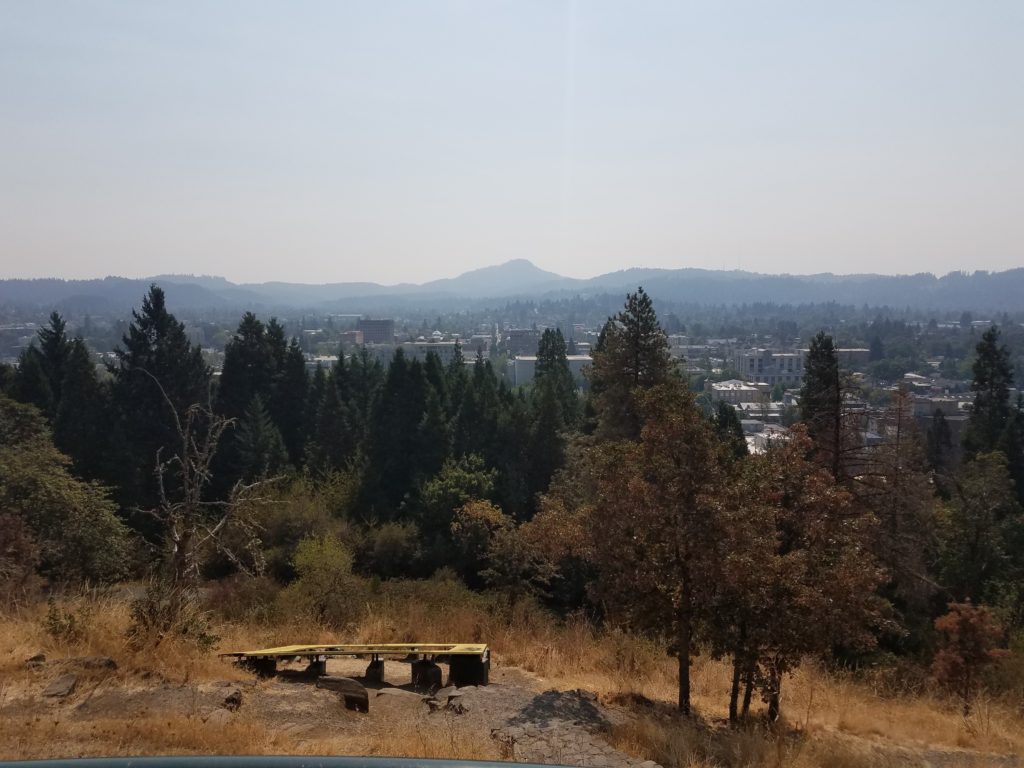 Even the Willamette Valley was socked in with smoke during the 2017 wildfire season.

Behind the scenes, DEQ worked to improve the index that helps users decide whether to cancel a baseball game or move practice inside, whether it is OK for your elderly grandfather to picnic in the Umpqua Valley or your pregnant partner to take the dog on a long walk in the Willamette, whether even active adults should stay indoors. Wildfire smoke contains tiny particles and gases that even for healthy people can be dangerous if inhaled, irritating your eyes, lungs and worsening chronic illnesses.

Since last year’s historic wildfire season, DEQ has made a number of upgrades to its Air Quality Index to better serve the public.

The new Air Quality Index now has meteorological data, downloadable data from specific monitoring stations across the state, and data from the Lane Regional Air Protection Agency. It looks more modern and is on a more reliable system. The software also reconciles differences between DEQ’s Air Quality Index and EPA’s AirNow site that previously could have resulted in users seeing slightly different readings on different maps. You can even create custom, interactive reports that show air quality trends from specific areas.

Having information on your laptop rocks. Having information in your palm? Even better. That’s why the new mobile phone app — simply search for OregonAir in your smart phone’s app store — will be a valuable tool to the many Oregonians who’ve come to rely on the Air Quality Index.

On the new app, users can pull up weather data – temperature, humidity, wind, solar radiation, air pressure – or view the list of pollutants DEQ monitors at a given station. Oregon’s Air Quality Index is based on three pollutants regulated by the federal Clean Air Act: ground-level ozone, particle pollution and nitrogen dioxide. 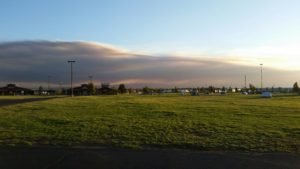 The Milli Fire sent smoke into Sisters, Black Butte Ranch and other parts of Central Oregon in August 2017

Search or scroll through monitoring stations, create favorite addresses, look at current air quality reports, see what station has the worst air quality at a given time. (Ugh, we know no one wants to win that contest.) Show the index as a numeric value (meh) or smiley face (yay). Customize your settings to show street or satellite terrain and more.

The dots on the map show a number that corresponds to the air quality reading. If you see 77 and a yellow dot at the Portland SE Lafayette Station that means air quality is moderate.

So what comes next? We can’t say what wildfire season will hold, but DEQ is working to place new air quality monitors around the state and those new monitors will be shown on the Air Quality Index. DEQ will also continue to work with state, federal and local agencies to provide critical air quality data and public health information during wildfire season and throughout the year.

Those little numbers on the map are so much more than numbers to Oregonians, especially during wildfire season. Last August, on the Oregon Smoke Blog, a bride asked if she should move her wedding indoors. Others wondered how they could air out their homes, their cars. They asked whether masks would provide relief, talked about which areas were hardest hit and where smoke-weary residents could find respite from smoke.

Like so many other Oregonians, my husband and I didn’t escape the smoke last Labor Day weekend. Past lines of cars with headlights gleaming in smoke-dimmed daylight and signs thanking firefighters, a red sun set in Bandon and a gauzy, yellow sky obscured the view of Florence’s Heceta Head lighthouse and the Siuslaw River Bridge.

As we traveled north, I wondered if the family gave up on its picnic or suffered through the smoke. Now, I wonder if grandpa had a smart phone because I know an app he might like to download.

The Oregon Department of Environmental Quality

The Oregon Department of Environmental Quality's mission is to be a leader in restoring, maintaining and enhancing the quality of Oregon's air, land and water.