They fastened their yellow or pink raincoats, pulled on work gloves and safety goggles, and tightened their tool belts for another session of sawing, hammering, and moving boards. For two hours, the area buzzed like a regular community construction site as the youth worked together on their latest project: creating garden bed frames.

Leading the charge was Katie Hughes, executive director of Girls Build, a Portland nonprofit with a mission of inspiring curiosity and confidence in girls through the world of building.

Typically, they do this by hosting summer camps and after-school programs for girls in the Portland area. But for 12 weeks this spring, they have parked their giant work trailer in the Oak Creek courtyard to teach the youth there about construction-related trades — and potential careers.

“We want to open up some doors to living wage careers so when they get out, they have opportunities and feel like they can go on to do great things,” Hughes says. “Plus, when you’re living in your own space and you don’t have to pay someone to fix things because you can do it on your own, that makes you more independent financially.”

And there’s another purpose: showing the young women that construction isn’t just for men.

Hughes, herself an experienced construction tradeswoman, has brought in an array of female instructors and professionals as role models. Some were previously incarcerated but have since built successful careers in the trades.

“It means a lot when the first electrician or plumber the youth get to know is a female who’s been doing it for years, and who’s confident and excited about it,” Hughes says. “The young women can ask them tough questions about what it’s really like on a job site.” 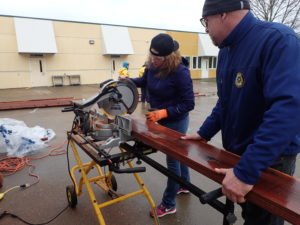 Girls Build offered its program to the youth at Oak Creek and the neighboring Young Women’s Transition Program (YWTP) at the invitation of Fabian Casarez, living unit manager for YWTP, and Marcia Latta with Multnomah Education Service District, who is the college and career coordinator at the two facilities’ schools. Latta heard about Girls Build on the radio and thought its mission aligned well with the vocational training Oak Creek and YWTP staff and teachers were already pursuing.

“The girls get to do something that’s hands-on, where they learn from people in the trades, and maybe discover they have an interest in pursuing this as a career,” Latta says. “The trades are good work opportunities that pay living wages, but sometimes making the leap into how you actually enter the eld is difficult. The youth are going to see how it works, and they’re getting instruction and mentorship from other women.”

Girls Build’s partnership with Oak Creek is being paid for through a three-year, $1.1 million U.S. Department of Education Juvenile Justice Reentry CTE Education grant. The grand funds the Opening Doors program, led by Portland Community College, which provides career and technical education and wraparound services to youth at Oak Creek, plus internships with trade organizations and other related opportunities.

For the Girls Build program, the youth started by building their own tool boxes out of wood. From there, they explored everything from electrical wiring to wall framing to concrete pouring.

On the cold morning in March, they were making garden beds where they eventually would plant a mix of flowers and edibles. Some had previous exposure to construction in the past via family members, but many had never picked up tools before the program. 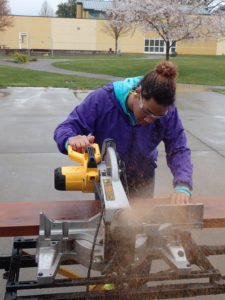 Several said they liked the way construction projects ended with something tangible, and that they enjoyed working together as a team. “I love how it’s really down and dirty,” said Cheyenne P., 15.“And I like the satisfaction of finishing a product.”

Others cited the Girls Build mentors as a big part of why they enjoyed the program.

“The way I grew up, women cooked and cleaned the house. It wasn’t very inspiring,” said Myranda S., an 18-year-old currently at YWTP. “It’s nice to see women get out there and know what they’re doing in the trades.”

Tatyana M., also 18 and at YWTP, agreed. “I never really thought about a construction career because I mainly saw guys doing it. They [Girls Build] came here and showed us what’s possible — that we are girls and we can do this. They are inspiring.”