With the help of 7th Graders Luca, Lola, and Athena, Oregon’s Net Neutrality bill was signed into law

It all started when 12-year-old Luca Larsen-Utsumi first learned about net neutrality through an Instagram post. She started advocating about the issue and its importance for the internet before it was repealed, alongside her two friends, 12-year-old Athena Wooters and 13-year-old Lola Hatakeyama.

When Federal Communications Commission Chairman Ajit Pai voted to overturn net neutrality protections, the three 7th graders decided to take action and make their voices heard by planning a school protest. This was just the beginning. Nearly two weeks later, the three students testified in support of net neutrality and House Bill 4155 in front of Oregon’s House Committee on Rules.

“When kids get involved, you know someone really screwed up,” said Athena during her testimony. 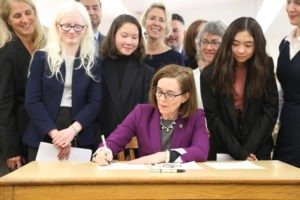 “The internet has democratized knowledge and is an invaluable tool for education. It’s so important that it remains open and accessible for everyone,” said Governor Brown. “In Oregon, we want to make sure that access to the internet is a level playing field, instead of exacerbating economic disparity.”

Learn more about Luca, Lola, and Athena’s fight for net neutrality in Oregon.

Natalie King serves on the Communications Team with the Office of Governor Kate Brown.